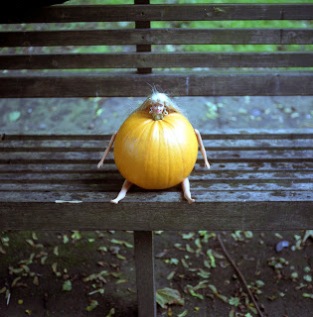 Even though the Hayward Gallery offers a booklet to explain David Shrigley’s work in themes such as ‘Headlessness’ and ‘Misshapen Things’, there is actually very little explanation as to the meaning of the 175 artworks that make up Brain Activity at London’s Southbank Centre.

Large keys hang throughout the gallery in between the works. Beside these keys gallery assistants stand like gate-keepers, ready to help. When asked his opinion on the animation New Friends 2006, featuring a square trying to join a group of circles, Jules Gbokova shows me his programme that he has thoroughly underlined in different colours.

“For me, this is about going to a new school. But also it’s also about immigration. If you can’t integrate you have to go. The square is trying to dance with them, but he is square. He is screaming when they saw him into a circle, but they still did it. As human beings we behave exactly like that. It’s the same in a marriage. You should accept each other, instead of trying to turn the other into you.”

And the ostrich? Why hasn’t he got a head?

“It’s not why,” he suggests “It’s where. Hunters follow the ostrich but when he gets tired he doesn’t resolve the problem, he just hides from it. He should fight! But he doesn’t. He puts his head in the sand. This is like politicians who don’t resolve problems. They move them…  He is an ostrich, hiding from his responsibility.”

Shrigley graduated from the Glasgow School of Art in 1991. He lives and works in Glasgow and his cartoons have been featured weekly in The Guardian from 2005 to 2009. Because of his use of taxidermy animals, he has been compared to Damien Hirst, who’s retrospective at the Tate Modern is the subject of much discussion. But while Hirst uses diamond studded skulls and suspended sharks, Shrigley approaches themes of decay and human behaviour, but with ordinary, everyday objects such as eggs, teeth, squirrels and Rich Tea biscuits. His gold leaf engraved Gravestone, 2008 inscribed with the words ‘Bread, Milk, Cornflakes, Baked Beans, Tomatoes, Aspirin, Biscuits’ has the same message as Hirst’s For the Love of God but Shrigley’s preference for the everyday means you get less distracted by the object itself, while confronting your mortality.

Some works don’t need keys to be understood because Shrigley has written on them. A vat of paint has the word ‘ANTI-DEPRESSANT’ across it. A painting of an annoyed-looking woman says ‘PAINT YOUR WIFE’ across the top. Then there are two walls full of drawings, 80 of them in fact where the audience seems to spend the most time. Longer, in fact, than around Shrigley’s more famous sculpture I’m Dead, 2010 of a taxidermy dog and sign.

There is no effort on Shrigley’s part to beautify human beings or their behaviour through his drawings. A couple point and say “such horrible little faces!” Among the drawings there is a great depiction of the concept of a career (see above), there is a worm rejoicing because he is wearing a sock and a girl trying to have a picnic with ants crawling up her. It is simple, effective comedy which he also achieves throughout the exhibition, such as when you discover that a barely-there hole in the wall is a viewfinder for a giant, pink worm sculpture hiding inside some partitions.

If you compare Shrigley to other comedic artists such as Banksy, his craft can sometimes come across as less ambitious. While Shrigley is busy crushing a ladder, enlarging a teacup or giving Barbie a pumpkin body, Banksy has stolen a telephone box, cut it in two and then put it back onto the street bent, with an axe in its ‘belly’ and red paint trickling onto the pavement. The comedy achieved by Banksy is more powerful because he had dared to impose his narrative on the viewer, rather than left it open to interpretation.

The Contents of the Gap Between the Refrigerator and the Cooker, 1995 is a sculpture which in many way encapsulates the uniqueness of Shrigley’s work. Its cartoon-like appearance winks at advertisements for Domestos or toilet cleaning products that enlarge germs into little monsters with wiggly arms and sticking out tongues. This work elicits an urge to not just be looked at, but to be squeezed and played with. Shrigley’s art goes so far as seeming to be or actually being edible, such as Rich Tea Biscuit and Nail, 2001 or Black Forest Gateaux, 2001 but despite this and despite Shrigley giggling throughout his Hayward Gallery film introducing the artist, Brain Activity is a fascinating display of very grown up things, handled in a wonderfully childlike way.

“The impact of television on contemporary culture” is what the latest exhibition at the Institute of Contemporary Arts aims to represent. A wide-themed and ambitious project, timed to fit in with the UK’s digital switchover, Remote Control dissects the many faces of a seemingly familiar, domestic object.

The top floor could be nicknamed ‘truth-mongering’. Photographs by Taryn Simon, Martha Rosler and Richard Hamilton present television as a powerful tool for journalists, capturing images of protests and war brought right to your sofa. ‘Cornered’ by Adrian Piper is perhaps the most artful of the truth-mongering pieces. She talks straight to the camera, flanked by two copies of her father’s birth certificate, one indicating that he is white, the other octoroon (1/8th black). This isn’t a piece of journalism, but rather a very personal deconstruction of racial identity.  ICA Bookshop Assistant Michael Crowe says he finds Piper the most interesting in the exhibition, not only because she was an early user of television as a medium for art, but also because the piece is “very confrontational, which is not something you find in TV programs ordinarily”.

The message coming from many of the exhibits in Remote Control, is that rather than confronting the viewer, TV is an ode to consumerism. It re-enforces the status quo through advertising, mindless soaps such as Dynasty and seductive escapism of the abstract female. Friederike Pezold’s ‘Mundwerk’ (Mouthwork) depicts images of painted lips up against a television screen, while Richard Serra’s documentary ‘Television Delivers People’ explains:

“You are the product of television (…) You pay the money to allow someone else to make the choice (…) Commercial TV defines the world so as not to threaten the status quo”.

Jessica Diamond continues along the same vein in ‘TV Telepathy’ with the bold words: “EAT SUGAR SPEND MONEY”. But though the ICA describes Diamond as “concerned with pop culture and consumerism”, they appear to underline, or perhaps undermine that message, by placing the artwork isolated in the cafe area, parallel to their lemon tarts.

In the row of televisions acting as historical curios, one documentary stands out: TVTV (Top Value Television) ‘Adland’ filmed in 1974. Though a critique of the advertising industry, where advertising teams believe a good idea is like “chucking poisonous gas against a wall. Poof! Sensational! Yeah!” it is actually a quaint, charming documentary about a time when advertising seemed like a terribly glamorous industry. Jingle writers getting excited about the emphasis on a single word, singing hamburgers and a camel munching on a Camel cigarette as the presenter jokes that the camel is “a cannibal”. What was once a gorilla-style documentary now seems trite compared to current versions. This nostalgia is captured in ‘Felix Gets Broadcasted’, a collage by Marc Leckey that includes the first ever image to be seen on television broadcast of a plastic Felix the Cat, spinning slowly.

Despite the focus on news journalism, the dangers of advertising and taking the threat of consumerism seriously, Remote Control begs the question can television be art? TV might not conjure up paint-splattered studios but Tauba Auerbach achieves a Matrix-like aesthetic in ‘Static III’ and ‘Static IV’. TV was and is about the transfer of images through an information channel. Perhaps it can be a sculptural medium after all, but does that mean that Channel 4 should be storing their now redundant hardware in the entrance? ICA explains that artist Simon Denny has placed Channel 4’s mammoth hardware there as a statement about technological waste. But no, TV stations, that doesn’t mean you can use their entrance hall as a dumping ground this month.