A mention of an art work that I came across and am super excited about. The piece is at the National Portrait Gallery on the left just before you walk into the Giacometti exhibition. It makes more sense seeing it live, as there are tiny details and writing that doesn’t come across on the images below. For instance on the left of the city’s skin, there is a break in the wall, there are also inspiration rivers and bullshit detectors, streets, buildings and roads of non-specific anxiety. This artwork is a self portrait by Grayson Perry. Perhaps the last vain self-portrait in the art world? You can watch a documentary on channel 4 about the making of it here: Grayson Perry’s Self Portrait – from Who Are You?: 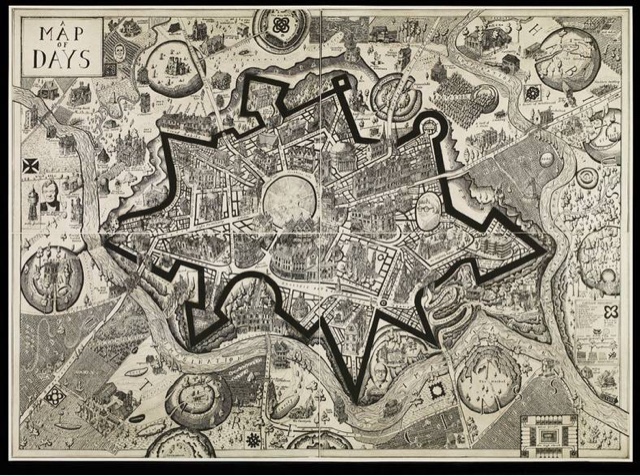 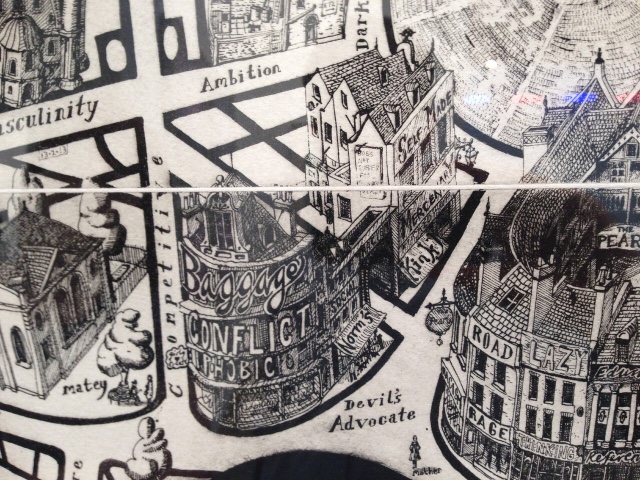 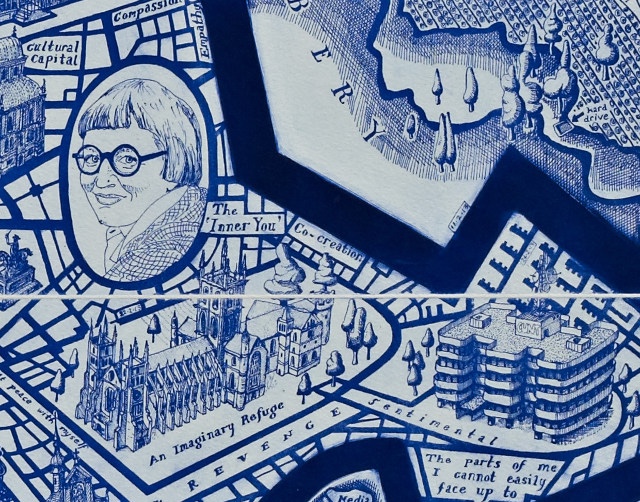 Tim Shaw works on multi-sensory installations that the Financial Times calls “politically charged yet poetically resonant”. His ‘Casting a Dark Democracy’ during his fellowship at the Kenneth Armitage Foundation, was an installation based on the mistreated prisoners in the Abu Graihb jail in Baghdad. It looked shocking, smelt of petroleum and sounded like a thumping, heart-beat and drum. Shaw’s current art show Soul Snatchers Possession at Riflemaker includes a couple high on Ketamine, a pregnant fairy and gang violence. Is he moving away from political themes? Shaw says that this show is his most political yet.

“Casting a Dark Democracy was about war, but also something more universal and timeless.” Shaw says “UK and America brought a sense of democracy and freedom to Iraq but at such a bloody price.” Soul Snatcher Possession came from the idea that “if you don’t toe the line and go along with what is being said, in the end they’ll gang up on you,” Shaw explains, “And if reason and diplomacy doesn’t work, then violence will.” While making the work, Shaw listened to a radio interview given by the French filmmaker Claude Lanzmann. Referring to the holocaust, Lanzmann spoke about a ‘dimension of barbarity that does not disappear from human nature.’”

The show is about political behaviour but it’s also applicable to friendship, business and gang culture. The result is a nightmarish installation where eight large figures loom. They are made from clothes, sacking and pillows with material that has been cut, slashed, stitched and manipulated into shape. One victim is hooded, in the corner stands a large blind man holding a stick and a woman slouches against a wall. It is life-sized and looks like it could be real people in the dim lighting. Shaw says that the installation doesn’t frighten him because it is already there in his own mind. Though he admits that there were times, particularly when he was working too hard to put the show together, when he found the man overlooking the woman in the corner a little depressing.

Born in Belfast in 1964, Shaw says growing up in Northern Ireland in the 70s was like growing up in a warzone with bombings and shootings. He describes the tarmac on the road as “boiling with anger” and he says the purpose of his art is: “taking you into a different world, taking your imagination somewhere, a place to be inspired, shocked, frightened, surprised, all of those things. That to me is what art should be about.”

Shaw remembers going to a famous hypnotist’s show as a child… “I volunteered to go on stage with six other people. He went from left to right, he clicked his hands and each person went out in a couple of seconds. I didn’t go out, nor did I pretend to, and there was a sort of uncomfortable second or two and he whispered in my ear “don’t fuck the act son”. What seemed like a lifetime later, I decided I better follow suit so I pretended to go under. Making this piece of work I thought about that time. It’s sort of an insight into the powers of manipulation and I suppose most of us go along with what is demanded of us.” In ‘Soul Snatcher Possession’ perhaps we have a little of that child’s disappointment, that the hypnotist, a man who was supposed to be magical, turned out to be just an ordinary bully after all.

Shaw is happy to be transparent about the thought processes that lead to each sculpture. He says Ketamine comes from going to The Big Chill music festival. “There were these two figures, a man and a woman, quite young, wearing tall pointed hats and dancing in this ridiculous way. One was holding out a large ladle and on the end of it was Ketamine. The girl was bending over and sniffing it, like a bee coming onto a plant with his proboscis. I found it ridiculous and hilarious and felt that this needed to be commemorated.”

Pregnant Fairy was cast in memory of a couple who he called aunt and uncle. They used to tell him as a child about the fairies at the bottom of the garden. He wondered how fairies have been alive since the Victorian times. ‘Baby Jackdaw’ is a product of living and working in Cornwall, surrounded by buzzards and energetic cows. Though Shaw admits to knowing a thing or two about cattle handling, he says the cows surrounding his work studios are fairly dangerous. “You do get charged, they have big horns and they can run quite fast and jump three or four foot over a fence”. The bird that was the inspiration behind ‘Baby Jackdaw’ was found by Shaw’s chimney sweep, he had been mummified by soot. Just like the ketamine couple, Shaw would see this discovery as something that deserved to be commemorated.

When asked if he would consider becoming a filmmaker, Shaw is quick to say no. He does however seem interested in developing his installations, so that they actively involve the audience.

“The audience will be an unwilling participant and watch the door shut behind them!” he jokes. This a rather frightening prospect, given that he scrapped the sound of ‘Soul Snatcher Possession’, precisely because the natural, muffled, traffic sound were closer to real cases of entrapment. Although Shaw says he doesn’t know where his art fits into the bigger picture, his inspirations are: painter Mark Rothko, sculptor Giacometti whose stick figures he calls ‘magic and capturing what it is to exist’ and author George Orwell. “What is great about Orwell’s 1984,” Shaw says “is that it is very clear, easy to read and the message behind it is full of profundity. That’s what I want to do with my work.”